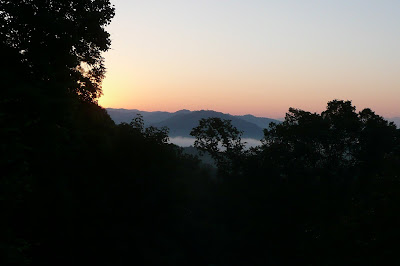 It's going to be hot again and I head out early with my hoe to plant another tier with corn and to sow another short row of Blue Lake bush beans. With any luck, that'll extend the fresh vegetable season a bit. 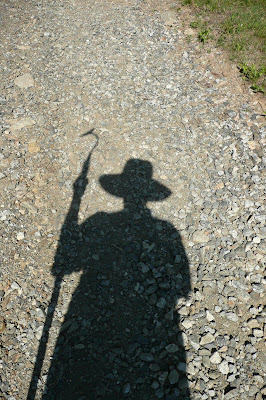 Meanwhile my husband, who has just laid drip hoses along the two rows of tomatoes, mulches them heavily with old hay. A beautiful sight! -- it'll hold in moisture, keep weeds in check, and slow down the onset of blight by keeping the blight spores in the soil from splashing up on the plant. But wait, there's more! Over the winter, the hay will rot, adding to the richness and tilth of the soil. 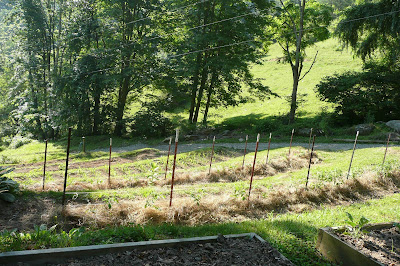 By nine-thirty it's already too hot so I pick asparagus (Eddie supervising) and head for the house and chores that will keep me inside. -- making hummus . . . and maybe some curried asparagus soup to chill for later. Sounds like a plan. 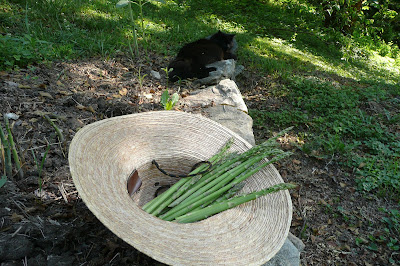 I can't believe you are still getting those beautiful asparagus! Mine are tall ferns now...chilled curried asparagus soup sounds delightful!

John put a Whole Lot of composted cow manure on the asparagus bed in early spring -- like about eight inches. They were slow getting started, having to work their way through all that extra stuff but now they're hitting their stride and doing great!

You seem to be very well-versed in garden type stuff, maybe you know what's growing in my yard. They start out looking like asparagus in a way, then keep growing very tall...taller than me. They are hollow and look almost like bamboo when they dry out. Come back every year. I can't get rid of the things.
Too bad the things we actually plant don't grow as well as the things we really don't want.

That doesn't sound like anything we've got around here -- not that I can think of, unless it's river cane. Your county farm agent or extension agent might be able to identify it for you. Check out the link below.

Thanks, Tammy. The picture has, to me a kind of primal Mother Goddess/Grim Reaper look -- and, I swear, my lower half isn't really Quite that big. (Does this shadow make me look fat?)