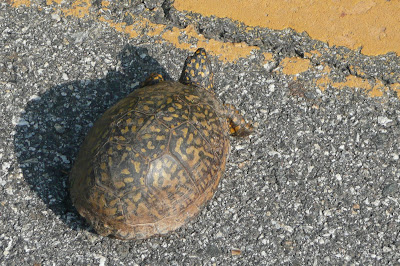 This time of year brings out the box turtles, roaming around in search of food and love. And like the fabled chicken, they always want to cross the road. I often stop to help them to the other side, having seen far too many get run over by folks who weren't paying attention. The problem is, sometimes, that the other side of the road is a sheer cliff I doubt the turtle could climb or it's a steep drop off into a rocky stream that could be fatal. So I put the turtle in the car with me and drive till I find what looks like a nice turtle habitat and there put my befuddled passenger out into a nice grassy place with water nearby.

The turtle has generally stayed tight shut as we travel. I set him down in this new place and he slowly lowers his shell and peers suspiciously out.

I imagine him later, hanging out with new turtle friends.

"Well, the way I got here is I was abducted by an alien. Thelma Lou was expecting me and I was already running a little late and just then along come this strange vehicle. It slowed down and then it stopped and hovered right near me."

"Well, I shut up tight, hoping it'd lose interest and move on but then all at oncet something grabbed me by the carapace and swooped me up. It must of been the alien, putting me into its vehicle. I stayed shut as tight as I could, having heard that them aliens are bad to to put probes in a body's orifices-"

"Naw, they didn't do nothing. Unless it was some kindly of a mental probe, scanning my brain to steal all my knowledge. I didn't feel nothing though. The vehicle went along for a few minutes and then I could feel it stopping and could hear the hatch opening. Then the alien got out and carried me a little ways and set me down. And that's how I come to be here. Reckon how long it's going to take me to get back to Thelma Lou's? And reckon if she'll believe this story?"

Hi Vicki - nice to know I am not the only "turtle facilitator" around! Don't try it with a snapping turtle though! I am enjoying "In a Dark Season" but am quickly realizing that I should put it down and start from the first book. I love reading an entire series from the beginning. So back to amazon.com to get the others. We'll be in town June 19-23 - do you know anything about the restaurant that is due to open on the 20th in Marshall? Thanks and keep the wildlife pics coming. -Liz

Hey, Liz, Not a clue about the restaurant--did I hear it's going to be Italian? Can't remember.

Yeah, it's nicer to read a series from the beginning if possible. You see the characters grow and all that stuff.

I too am glad to hear I'm not the only one who stops to move those turtles in the road. I always imagined that with my luck, they turned around and headed back across as soon as I left. I like your story better. :-)

Turtle Transporters, Ltd. -- that's us! Maybe we should have ball caps with a logo.

Susan, did you ever determine what that bamboo-like stuff was? I'm curious.

Nope. Still researching. I checked out the link you sent, and they don't look quite the same. I have taken some photos and am going to email them around and see what I find out. I do know those things will not die. I have cut them back over and over and up they come. I think I'm just going to give in and make them a part of the landscape. (Kind of like the Queen Anne's Lace in front of my porch.)
I'll let you know when I find out something.

Oh, I NEVER get rid of Queen Anne's Lace -- I love the stuff! Let me know when you find out what your mystery stuff is.

I always suspected the alien theory might exist in the turtle world....