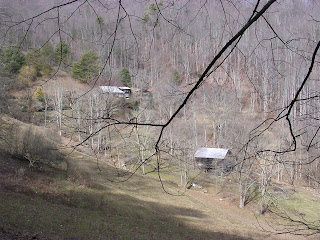 Of course all of you know that I base the Goodweather farm on ours. So let's pretend for a moment, that we're in the setting for Old Wounds.

The top picture (and remember that you can mouse over it and click to enlarge) shows the barn the Goodweathers lived in while building their house. To the left and a little above the barn is the chicken house (hard to see.) Higher up is Elizabeth's house and to the right of that, you can make out Ben's cabin (or Little Sylvie's in Signs in the Blood). The multi-tiered garden starts just above the chicken coop.

The second picture is taken on the road that runs along the top of the pasture and into the woods. (We call it 'the New Road' as it was bulldozed for us only about 25 years ago. It doesn't actually go anywhere -- its purpose is mainly to provide a way to get the tractor or our little utility vehicle into the woods for firewood or for hauling fencing supplies.)

This is the road Elizabeth often takes a walk on and the big tree to the left is where the deer stand that the young Maythorn used as a spy post would have been. And this is where the young Rosemary followed her mother on a cold winter day.

She trotted down the path 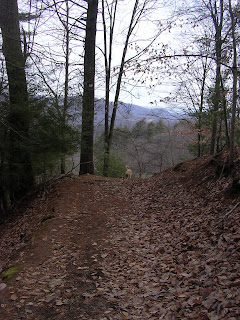 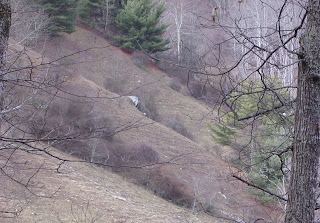 how surprised her mother would be when she
appeared. A little way on and the path veered sharply as it wrapped around the mountainside. Just beyond that turn was one of the benches Pa had made for Mum so she could sit and look at the view. Maybe she would be there. Humming, Rosemary hurried on.

In the late eighties I (me, Vicki, not Elizabeth) used to walk our two Akitas on this path daily. They were large (over a hundred pounds each) dogs and, though lovely with people, completely murderous around any other animals (dogs, cats, chickens, etc.) So they had to be kept in the house and exercised on the leash. Once, when we had just hit this stretch of very uphill path, a squirrel ran across the road in front of us. Both dogs lunged at it, pulling me down, splat on my face. I hung on to the leashes like grim death and the dogs kept going, towing me behind them like a particularly inept water-skier. When finally, after they'd dragged me almost to the top of the hill, I managed to stop them and stand up, the top of my head was completely covered with dirt and leaf mold.

I digress. The last picture, if you'll look closely is of Froghead, the rock that sticks out of the pasture like a granite thumb, the place where Rosie first met Maythorn. My boys gave it that name and it was a favorite hangout of theirs. Higher up the mountain above the house, is what they called the cave -- actually a little shelter under some huge boulders that lean against each other. This, of course, was the inspiration for Rosie and Maythorn's Cave of Two Sisters.

But, and some people have asked this, there is no Mullmore, no faux-Tudor mansion on the other side of the ridge. I do use my imagination for some stuff!

I really enjoy seeing the pictures. It definitely adds to the pleasure of reading your books!

Thanks, rmt -- I'll do some more now and then -- possibly I'll even get around to posting an album for each book eventually.