Always Use A Bag 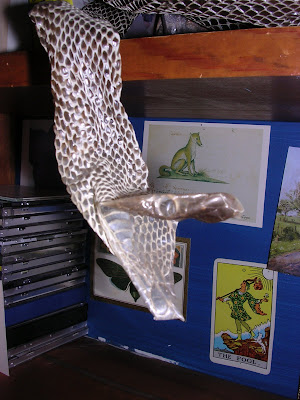 I'm fascinated by the beauty of many natural things -- old bones, shells, rocks -- and shed snakeskins. It's amazing to me how a six foot plus blacksnake can slip out of his old skin so neatly, leaving a perfect ghostly image of himself down to the lenses that covered his eyes.

There's been ample opportunity to study these shed skins -- we have one blacksnake who leaves a skin in our greenhouse several times a year while others twine their discarded finery into the crevices of our rock walls.

Blacksnakes are mostly welcome around our place -- they eat rats and mice and are said to deter copperheads. Unfortunately, they also eat baby birds and on occasion, one has taken up residence in our chicken house, swallowing the eggs one after another. When this happens, I try to catch the snake, put him in a bag, and take him for a ride around the mountain to release him in a wooded area.

I didn't always use a bag. It just didn't occur to me. But came the fateful day when I had hold of a great large snake lumpy with just-swallowed eggs. I handed him to my 15 year old son to hold while I drove the truck to the accustomed snake release area a few miles away.

We hadn't even gotten down to our mailbox before the snake began to poop. (Somehow, I'd never considered this possibility.) It was pasty and yellow and smelled (no surprise here) like rotten eggs. Appalled, my son let go of the snake's body but managed to hang on to his neck. "Arrrgh!" my son shouted. "Mum! Look what your snake is doing!"

And now the snake was regurgitating the last egg he'd eaten. I stopped the truck. "Just put him out here!" I said.

Easier said than done. My son had control of half of the snake -- the head end. But the tail end had slithered under the truck seat and was firmly wrapped around the jack.

By the time I'd gotten the indignant snake loose, the completely indignant son mollified, and the interior of the truck cleaned out, I'd learned a lesson.

Always use a bag.