The Water Dancer by Ta-Nehesi Coates 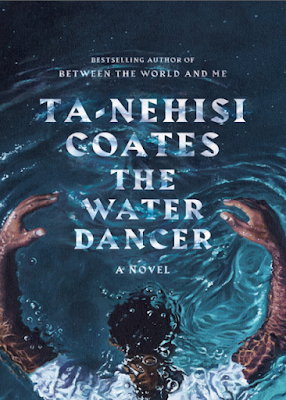 My reading of this debut novel by a highly acclaimed writer of non-fiction was somewhat interrupted by recent events and I fear I can't do it justice. There are links to two thoughtful reviews at the end of this post -- I won't attempt to better them.

But here are my personal takeaways.

I was moved by the humanity in the portrayal of life among the enslaved and especially by the recounting of the survival of African traditions.

The leap into magical realism--wherein the protagonist and some others have a magical power called conduction that allows some bending of time and space--was quite a departure from the usual historical narrative of those times.

But I so understand the desire to give extraordinary power to the oppressed and enslaved. I did something similar in The Day of Small Things  when I gave supernatural strength and magic to the octogenarian Miss Birdie, wanting to empower an old woman who would normally be helpless in the face of such adversity.

Another takeaway was Coates's eschewing of the term slave for those who were enslaved. That may seem a niggling difference but I believe I understand.  I can imagine a person saying, "I may have been enslaved but I was never a slave. That word does not define me."


I'm going to work on making this a part of my vocabulary. After all, I've managed to learn to do one space instead of two after a period and to use the term Asian rather than Oriental.  I can learn.

An interesting book, well worth the read.
NYT review HERE  and NPR review RIGHT HERE
Posted by Vicki Lane at 2:00 AM

The non-fiction that I have read by Coates has been intensely compelling so I am interested to read this as well.

Thank you for drawing the distinction between politically correct and just plain politeness or kindness.

We still can learn. There is hope!

I, too, love it that you said what's often disparagingly called political correctness, is kindness and politeness. Consideration for others.

I can appreciate the distinction in terms; as a person who has had cancer, I do not relate to myself as a survivor; I do not care to be identified by a condition that I once had. I also don't understand why "politically correct" came to be such a negative term, or even political; in my experience, an expression of political correction has nearly always been an effort to extend respect and kindness to a person or group whose experience has been disdain, disregard or even violence.