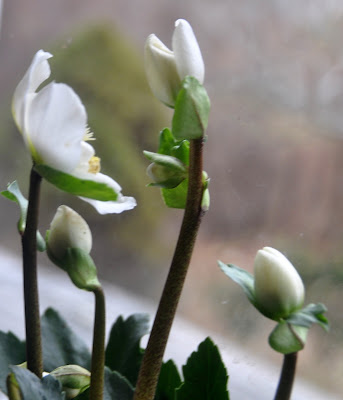 A gift from a dear friend -- come spring, I'll plant it outside. 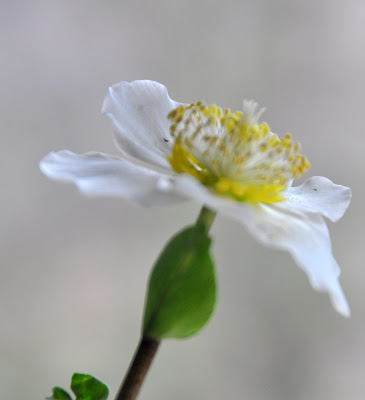 Wikipedia says: Several legends surround the hellebore; in witchcraft it is believed to have ties to summoning demons.
Helleborus niger is commonly called the Christmas rose, due to an old legend that it sprouted in the snow from the tears of a young girl who had no gift to give the Christ child in Bethlehem.
In Greek mythology, Melampus of Pylos used hellebore to save the daughters of the king of Argos from a madness, induced by Dionysus, that caused them to run naked through the city, crying, weeping, and screaming.
During the Siege of Kirrha in 585 BC, hellebore was reportedly used by the Greek besiegers to poison the city's water supply. The defenders were subsequently so weakened by diarrhea that they were unable to defend the city from assault. 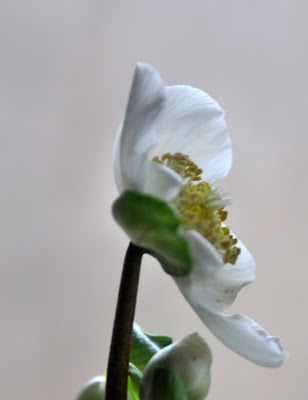 Gosh Vicki, although I have been a fan of beautiful hellebore flowers for a long time, I never knew of the history/legends that surround them. All are very interesting...thank you for adding to my knowledge. xo

Something strong that heals or hinders...and looks so beautiful as well!

Wasn't expecting this history on such a beautiful flower, great to know but think I'll use my own imagination on this one! So glad your home dear lady, you have taught us all so much! xx

What a powerful flower. Sure is interesting the things you come up with