From the Other Side of the Curtain 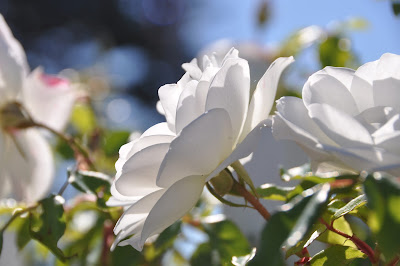 She was my roommate for most of the past two months -- a constant presence in my life – sometimes annoying (her TV stayed on day and night as did her lights) – sometimes endearing (she had a marvelous chuckling laugh and always said how nice John and Justin were because they would pass the time of day with her before coming over to my side of the curtain -- which I kept drawn so as not to be distracted by the flicker of the TV and the passing of people in the hallway.)

We were both caught up in our own problems and schedules and didn’t chat much but from the other side of the curtain I learned an awful lot.

She’d been a waitress for years at The Mediterranean – a popular Asheville restaurant/diner in the business district – and "had made good money too." I imagine her as one of those sassy, wise-cracking, no nonsense-taking gals who becomes an institution.

She’d "smoked like a freight train" for many years (part of her current health problems) and had a hysterectomy at an early age. No children, never married. 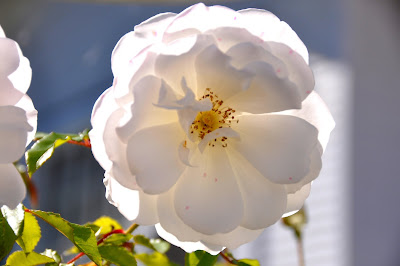 This was her third stay at this facility – recently she’d had a fall at home and had been sent to the hospital and then back here where she had many friends on the staff who gave her wonderful loving care and teased her out of her occasional grumpiness.

She had lived nearby in a trailer "full of knick-knacks," just down the road from one of her brothers. This brother seemed to be the one most involved in her care – he did her laundry and it was he that I could hear her fussing with from the other side of the curtain.

When he suggested that she would have to stay here longer, she bowed up like a mule. No, she would not. She’d made up her mind and she wouldn’t. She would go home and make it someways. (At this point, she could not walk or dress herself and needed help for her frequent trips to the bathroom.)

Then, a few days ago, when the doctor told her that she had congestive heart failure and was not going to be able to go home, she was distraught – I’ll kill myself, she said, before I stay here the rest of my life.

Saturday just after noon, I heard her cry out from the other side of the curtain, "Where am I? This isn’t my room." And then there was an aide calling her name over and over and someone shouting for the nurse and a great commotion as more and more people poured into the room.

One of the physical therapists came and took me away. The curtain was drawn around my roommate’s bed and frantic activity was going on behind that curtain. From the window of the therapy room, I could see the ambulance with flashing lights parked at the entrance.

The therapist took me for a long walk, then back to the therapy room for some practice with stairs and balance.

Outside the ambulance was still waiting.

We went for another long walk and when we returned, the ambulance was gone and I went back to the now silent room. Silent and cold. The air conditioning had been turned on and the window was open a few inches.

The atmosphere on the hall was subdued – several of the aides were fighting tears. She probably had a heart attack, one person told me but that was all.

The next morning, I learned that my roommate had died almost instantly, attempts at resuscitation had been futile.

When the aide who had loved her best came in to pack up her belongings, she told me that the window had been left open so the spirit could escape.

I'm glad she did. 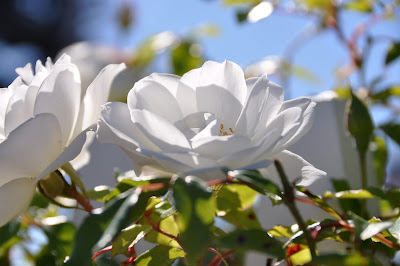 I remember when my mother was dying in the hospice. Her neighbour had a very emotional (knowing she way dying), and we discretely left the room. My mother died first, however. It was likely good for your poor neighbour that they wren't able to resuscitate her.

Well, I've sat and stared at my screen for about five minutes and I still have no idea what to say.

Although, yet again, I imagine the deep longing you have to be home in your own house, sleeping in your own bed, surrounded by your people and animals and things that you love, and I expect that this has, if possible, only increased that longing.

Absolutely, Karen. If, like my roommate, I was told I would have to spend the rest of my life here, I would long for such a swift and sudden release.

Oh dear, Vicki! To have all those intimate hours spent with just a curtain separating you from a stranger, and now suddenly she's gone! What a rather rude way of living and dying. For both of you. I imagine you would have gone home in a few days and gradually forgotten about her. You may still. But her death may be harder to forget. Cracking the window. Good. Let her spirit be free. Soon you will be in your own dear home!

I truly do not know what to say, Vicki.

To be separated by a thin curtain from someone who is a stranger and yet, over time, not such a stranger, is a very strange condition.

I am hoping that even through her illnesses, your former roommate has joyful moments.

Leaving that window open was a very sensitive touch.

You Will Be Home for Christmas. xo

Such a beautifully written story and tribute. It made me both sad and glad to read it. Glad she's free of her earthly limitations; glad she was cared for, though no-one chooses to be in a medical facility; glad you'll be going home soon (how you must long for that). My words are inadequate. Thinking of you.

I was very moved by this post. And by the final act of leaving the window open for her spirit to leave.

How disconcerting for you Vicki. I know, from my own family experiences, that when in hospital, one becomes very involved with the people in the beds nearby. You will miss your neighbour, even though she had annoying habits, but you will soon be home again and all this will pass.

No one should have to live as she was, unable to even go to the wash room on her own. I am trying to figure out what she meant when she said this is not my room. Just wonder where she was at that time. I personally think she had an loving, fun spirit, who wanted a life she could not have and would never have been happy living the life she was given. Heart breaking really, she was not happy. Better to go in the spirit form, I hope she is running free now and doing all the things that make her happy. I love that the window was left open to let her spirit run and do all the things she must of dreamed of when she looked out that same window. xx

And another window opened for her through your lovely story. Thanks, Vicki.

What a kind and sweet story of an individual and her end of live. Out the window to the fork in the road.

You are such a writer to your bone Vicki. I want you home! Xo

Being home will make you forget almost everything of what happened in this hospital. The sooner, the better.

A merciful end, really, and probably what she would have chosen .