Puddin' Head Wilson and Others 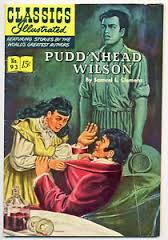 I read Mark Twain's Puddin'head Wilson as a Classic Comic over sixty years ago. So when I had a chance to download the book for free, I did.

I remembered it was about how two children, one the son of a slave woman and the other the son of a wealthy couple were so identical in appearance that when the slave mother, who had the care of the babies, switched them in their cradles, no one knew and the two grew to adulthood unaware of the truth. 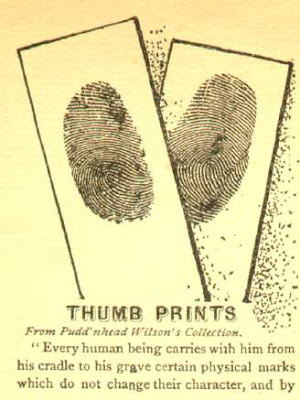 I remembered there was something about fingerprints -- a fledgling science at the time of the novel.

The book is an interesting read for Twain's picture of small town America in slavery days. And, of course, for Twain's wit.

But I was surprised at the memories that came back as I read -- I think that I read this particular comic at my friend Ann Hunsberger's house -- very possibly up in the tree house in the big oak by the sidewalk. I can't be sure but that was what flashed into my mind as I read, along with hazy memories of some of the comic panels -- a closeup of a flashing knife. . . a picture of the two little boys in one little wagon -- one in fancy clothes, one in plain . . .

My Kindle is loaded with all sorts of things to read and listen to. David Sedaris and Let's Explore Diabetes With Owls keeps me company through the night and Patrick Tull is waiting to read the first five or six Aubrey-Maturin books to me. I've just finished Social Life in Old Virginia Before the War and have begun The Lemoncholy Life of Annie Aster.

And am reminded I need to have my recently purchased copy of The Clay Girl brought to me . . .

I always wonder what people put in a position like yours do if they don't read. How bored they must get without that escape! (Although I realize it's still pretty boring even for readers . . .)

I didn't remember this Twain story. Will have to renew my acquaintance. Glad to hear you're consuming books! Enjoy.

You have books in several forms, and your remarkable intellect.........good companions for the recovery period. I'm continuing to pray for SPEED in your return to action!

You can sit and read without worrying about all the other things you should be doing, because you can't. And therein lies the silver lining to your recent cloud!

Clay Girl? Never head of it.
(Heather is well into her west coast trip of indy bookstores)

You are healing while reading! If only we could just accept that when in the throes of debility - but actually you seem (from a remove) to be doing a terrific job of just that. I'm glad for your full Kindle, sorry you are trapped, but glad you are in good company (and I hope there is no blaring TV!)

I never read Puddinhead, but I like Twain. I'll have to find that book. Get well soon.