The Writing Studio At Orchard House 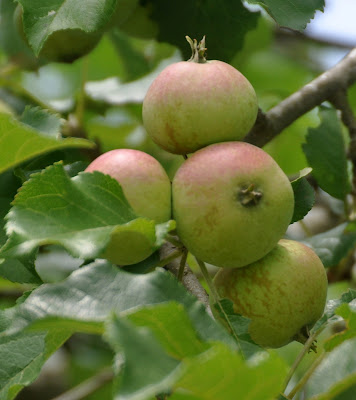 Last week at John C. Campbell Folk School, I taught a fast-paced, nuts and bolts course in novel writing. Our studio was in this idyllic setting with a mini-orchard out front but,for the most part the students were working too hard to be able to enjoy their surroundings during class time. 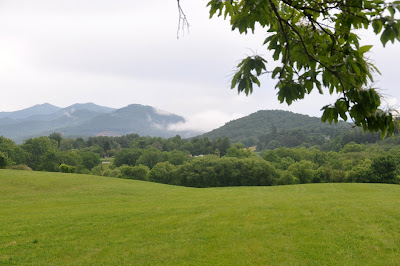 There were nine students with varying degrees of writing experience. Some had a novel in progress, some had nothing but an idea for a novel. But I suggested that they write all their assignments as parts of this putative novel. That way, by the end of the week, they might just have the beginning of a novel,

I would talk a bit about the various elements of a novel -- characters, setting, plot, dialogue -- and then ask these hard-working women to write a scene, incorporating the elements we'd been discussing. Right now. I'd give them twenty or thirty minutes and they were off, scribbling on paper or tapping away at their laptops. . .

A typical assignment was to write a scene with dialogue in which five people were in the scene and each should speak at least once, but most of the dialogue should be between just two people. While they were writing, I'd sometimes step outside and take pictures . . . 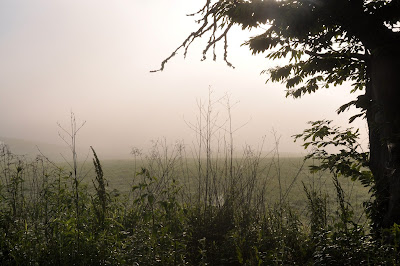 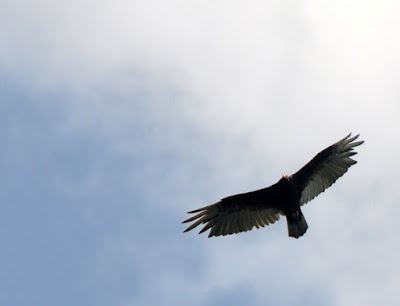 When the time was up, we'd go around the table and each one would read her piece and we would discuss how well it was working.

And here's the thing -- they came up with some really good stuff -- just like that, on demand. And, if they learned nothing else, they learned that they could write whether they were in the mood or not. No need for special surroundings -- music, incense, lucky teddy bear. Just do it.


That synergy thing I've talked about before with my writing classes kicked in by Monday afternoon and rather than a bunch of individuals, we were old friends -- listening hard, trying to understand what each writer was attempting to do, and making suggestions to help her reach her goal. The level of critique was impressive and the level of laughter was amazing. We had such fun!

The stories and characters were all over the place --
-- a female FBI recruit (written by a former agent) struggles to make the grade;
-- a previously happy homemaker, unsettled by Women's Lib taking a job that plunges her into some unsavory business and murder;
--  a woman trying to save her family home encounters murder at a craft fair;
--  a Holocaust story set in Vienna;
--  a family story set in Istanbul;
--  a plot involving an art dealer and an art expert;
--  a transplant to the South , troubled by injustice, decides to right some wrongs;
-- the first women of what became the WACs and the struggles they endured for acceptance; ---  a female reporter, sick of writing the Society Page, looks for the Big Story that will make her a real reporter.'

(These are very brief  and incomplete descriptions as I don't feel I should share the unique 'hooks' that these writers have come up with. (There are some goodies.)
; 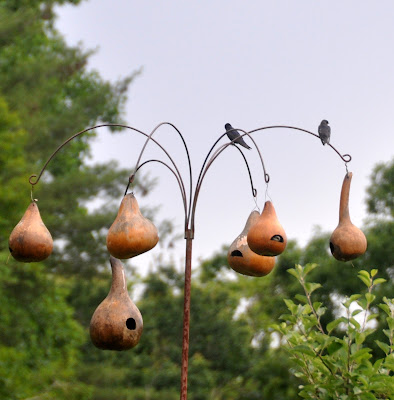 After an introductory meeting on Sunday night, we met from 9 to 12 each morning and from 1:30 to 4:30 each afternoon. They wrote and wrote and all too soon it was Thursday. On Thursday, the writing class had an hour to do readings. (All the other classes had a little exhibit before the closing ceremony on Friday afternoon, but as scribbled pages or even print out don't make a very inspiring exhibit, the writers read.) 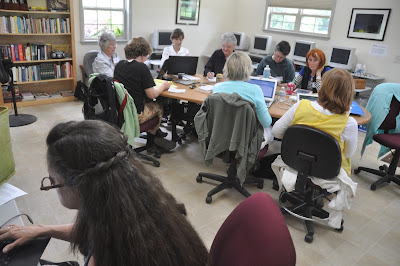 After some frenzied work printing out ( thanks, Bonnie Rose) and practicing reading (slow and loud, Gloria,) we took ourselves to this charming library in the main building where friends and fans had gathered to hear the fruits of our labors. One woman chose not to read her piece (everything is optional) and one of the others read it for her. Another simply didn't want to share hers till it has attained a higher state of perfection. So we had seven readers and eight readings. 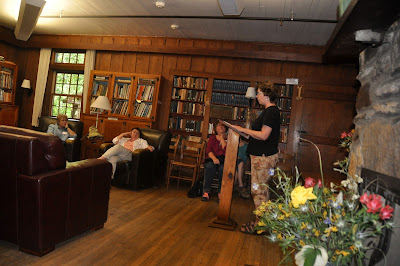 They did really well. Afterwards, I heard many compliments on the level of the writing and the presentation. They were all audible! And got laughs, in the proper places and gasps or sighs or stunned silences in other proper places. 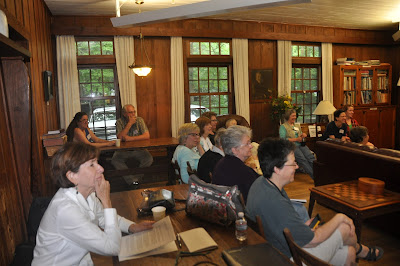 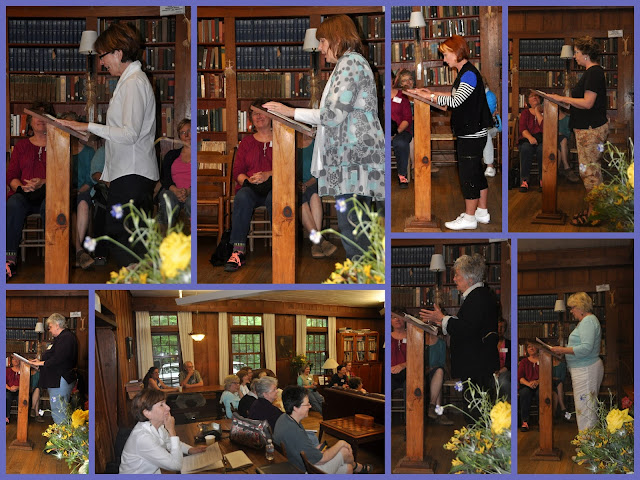 I'm already looking forward to next year when I'll be doing the same class in early June! 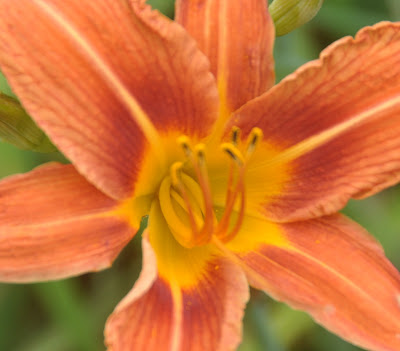 I'm not a writer, or planning to be one, but I'd be one that wouldn't read what I wrote out loud.

What a fun time, and hard work to achieve what you each wanted...including you, Vicki...spreading your talents on towards the next generation of writers. Thanks for the pics too!

Sounds like a great week! Wish I could have been there. Is that bird in one of your photos a hawk?

Vicki, the settings both indoors and out seem very welcoming to the creative spirit. It's interesting to learn that some of the participants did their writing by pen in hand, so that the words really did flow from their fingers onto the page.

I'm sure that each of your students has benefitted greatly from this experience. May you all keep on writing.! xo

Kudos to those fine folks. It must be very difficult to know you must enter a class and write no matter whether you feel inspired or not. I suppose that is the secret of writers...you have to write. Even if your day's work is discarded there are a few gems to retain.

Oh how I wish I could be in one of your classes! They are very lucky to have you teaching them!

What a great week! Love all that concentration and the resulting work.

I know several books that I would really like to read just from the ideas that you posted.

I bet your workshop is a great challenge to make those creative juices work. Your students must be good writers to show up and face spontaneous work. Your photo of the apples shows to me that your apples in your area are way ahead of mine. I will be looking forward to seeing the lily that your shared in my garden but mine won't bloom for quite a few weeks.

I applaud from afar those courageous writers. May they achieve their hearts' desires in writing. And they were blessed to have you as a teacher and mentor, Vicki. Wow.

The big bird is a vulture, Jean. Just to clarify -- no one HAS to read aloud or even to write. But they turned to and wrote like champs

Sounds wonderful Vicki. I wish I could have been there. The library is beautiful and the perfect setting for the readings.
An orchard! How lovely.