Virgil Sees No Prospects for a Settlement of Our National Difficulties 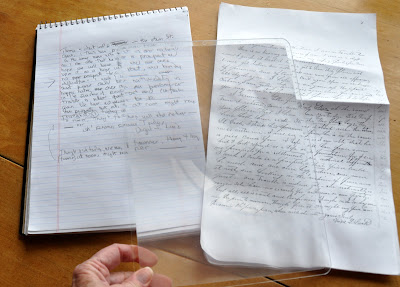 Remember Virgil? It’s taken a while to decipher the following letter, written to Dan Carpenter (Pauline’s husband.) Though Virgil is very wordy and repeats himself a lot, as I labored through (with the help of a full page magnifier,) I realized what a cry from the heart this letter is – written to a man he’s never met -- and Virgil came alive for me.

And at times I was reminded of our nation's present divisions. . .
I’ve put question marks after words I guessed at and have left blanks where I couldn’t even guess. Virgil writes on and on without starting a new paragraph but I think this is to save space (prisoners were limited in how many pages they could write) and I have kept his spacing, along with his spelling and punctuation.

Johnson’s Island, Ohio
Oct. 21, 1863
Dan Carpenter Esqr.
Dear Friend:
Your favor of 13th came safe to hand on 21 inst (go HERE for explanation of this term) containing $5.00 the receipt whereof is hereof acknowledged and at the same time, you will allow me the pleasure of returning herewith the sincere thanks of a grateful heart, I am humbled (?) to think that I have a friend in the United States that (if they do not sympathize with me politically) sympathize with my sufferings as a prisoner of war. Philanthropy is philanthropy under any and all circumstances, and it matters not whether I differ in politics with others, it is not magnanimity in them to treat me with contempt (or cruelty.)  It is a pleasure to me to know that I have acted, during this war, in such a manner, that I was not ashamed to meet my enemy on any occasion. Federal prisoners have frequently fallen into my hands since the war commenced, and I was willing for them to say what kind of treatment they have received at my hands. I do not blush to meet and recognize them out in the country, it is a relief to connect with them, while they, on their part, were bound to do me the justice to say that I have always treated them with all the kindness in my power.  Any instances I could enumerate, but all this would (?) be uninteresting to you. 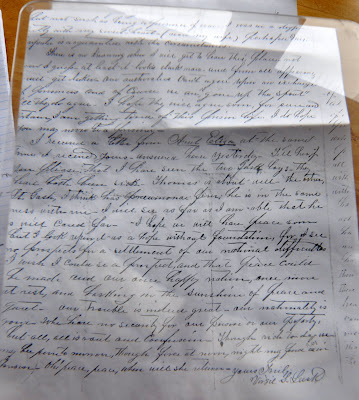 Fascinating as ever, Vicki. You know, I've been using the term, 'Spondulix', for years, then it turns up in this correspondence.

I had read it in books (American) from the Twenties. And when I looked it up, I found that it was still in use in the UK.

wow...fascinating letter...it def gives insight into the mind of one during the time....and with the civil war it was so different too...they knew each other, came from the same place...it is interesting the philanthropy between lines....from some at least, willing to help each other....

This is fascinating, Vicki! Thank you so much for taking the time and trouble to transcribe it. Poor man, he does sound quite in the depths of despair, doesn't he? Do you know anything of his life after the war?

What a gem of a letter! So glad you shared Virgil's words with us. He certainly had his opinion of things, and gave a good glimpse of his circumstances. THanks so much!

All these years later, Virgil's words still ring true... "Oh! peace, peace, when will she return"

Thank you so much for sharing.

For "sunshine of peace and _____" try: "sunshine of peace and quiet". Unfortunately, the resolution of the photo isn't good enough for me to attempt the last few words. 19th century handwriting is not easy to decipher, that's for sure ... I've done my fair share of it, though, and it does get easier over time. At least Virgil didn't cross his letters! Now that gets interesting, as you may already have discovered. --Mario R.

Thanks to Mario who suggested the word 'quiet' in the next to last paragraph. And then I took another look and filled in some more blanks. It does get easier.

Thank you for sharing your transcription of Virgil's letter; wow.