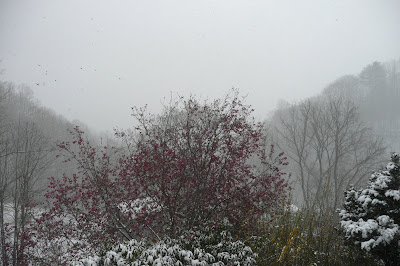 I'm quoting, of course. Those are the words of the Dowager Duchess of Denver in the opening pages of Dorothy L. Sayers' immortal Busman's Honeymoon. They sprang to mind when I looked outside yesterday morning at the crab apple, rosy beneath the snow. 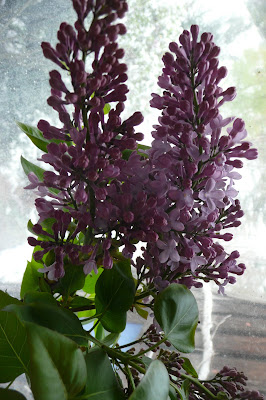 I had picked a bit of lilac for the kitchen window -- and beyond it I can see the parent bush with its heavy frosting. (Can anyone guess why an ex-English major would have planted a lilac by her front steps?) 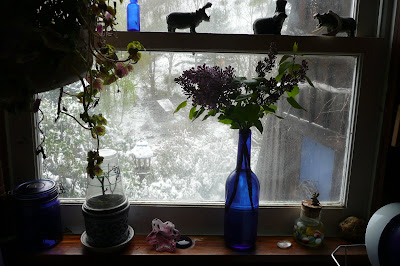 In the afternoon the sun came out; the sky was blue; and the snow began to melt . . . 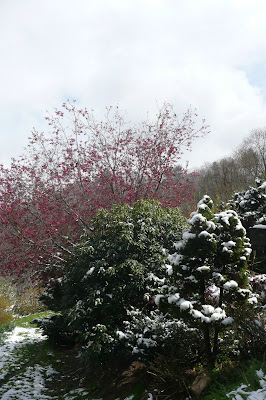 And then it began again. It was still snowing at 10 pm.

But I cheered myself up by rereading the email I had from Liz whose friends, recently returned from France, told her they saw my own La Montagne des Secrets (the French translation of Signs in the Blood) on sale in the grocery store.

I find that kinda cool. Unlike the weather, except in the literal sense.

I can't wait for our lilacs to bloom. And I love your cobalt blue bottles. I have a few, too. Don't they look amazing with the sun shining through?

I'm looking forward to our lilac to bloom in the side yard. It's a wonderful site. It's now to tall for me to cut blooms, but I really enjoy it. A sure sign of spring.

Thanks for the photos. They brightened my day.

"When lilacs last in the dooryard bloomed..." might be the reason for your lilacs planted by the porch. I'm a bit jealous; grew up with huge lilac bushes in the yard in Wisconsin, but they don't do well in our part of Ga. When we had our first spring in this house about 3 years ago, I was amazed to find three spindly little lilacs in our neighbors side yard, directly in view from the bedroom window. Gave the feeling that we had found the right house to be our home, even though they're not ours. Enjoy!!

Willow -- the tiny bottle is one my son found in one of the branches (creeks) on our place -- probably a medicine or bitters bottle. The big bottle is (I think) an empty Harvey's Bristol Cream sherry bottle.

Hi, Brenda -- Thanks for stopping by!

Got it in one, Lynne. A friend gave me that lilac when we first moved here and as I was trying to decide where to plant it, I thought of that poem . . . (Can you see where Nola Barrett in the last book came from?)