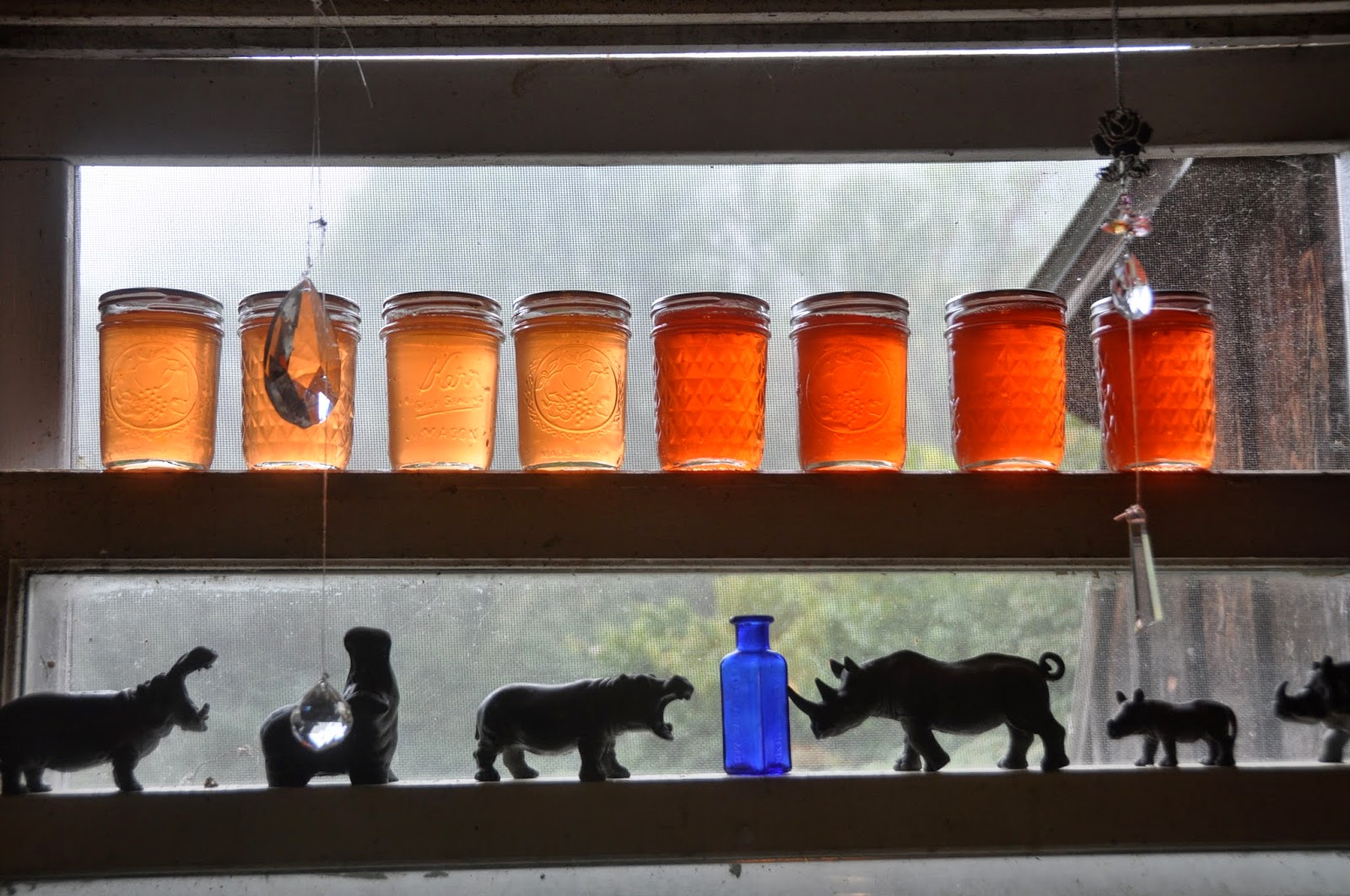 Why in the world would  someone spend the better part of a beautiful fall day to make eight small jars of jelly?

I like to think that it was, in some way, a nod to all those forebears of mine -- women who took pride in their plump and succulent preserves and found joy in a perfect pot of jam or the clear jewel-like glimmer of a jar of jelly. 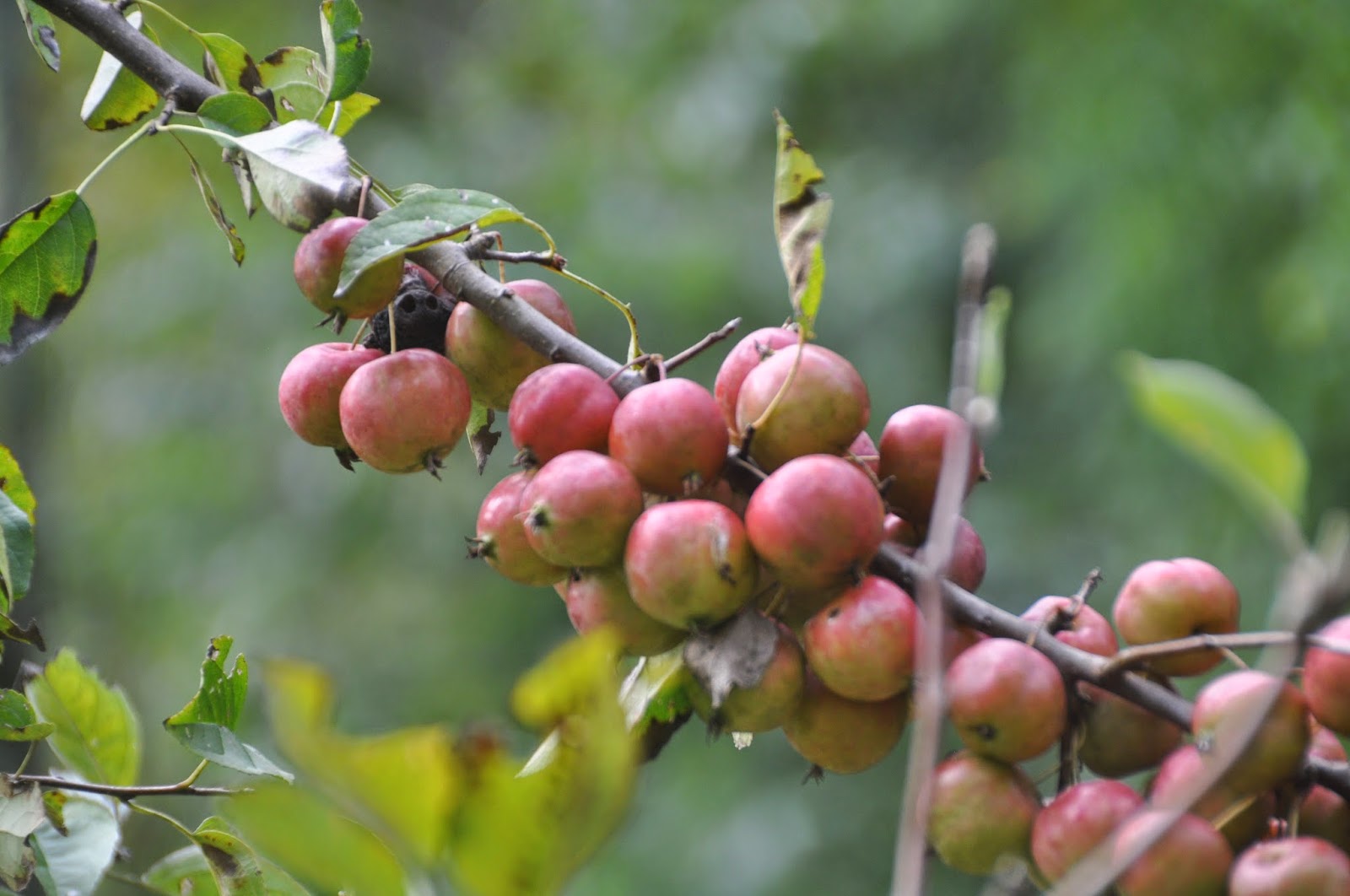 It began when I spotted that mystery fruit  tree in the pasture HERE. It was indeed a wild crabapple and a few days ago I gathered as many of the charming little fruits as I could reach. They were absolutely perfect and unblemished -- unlike our regular apples. 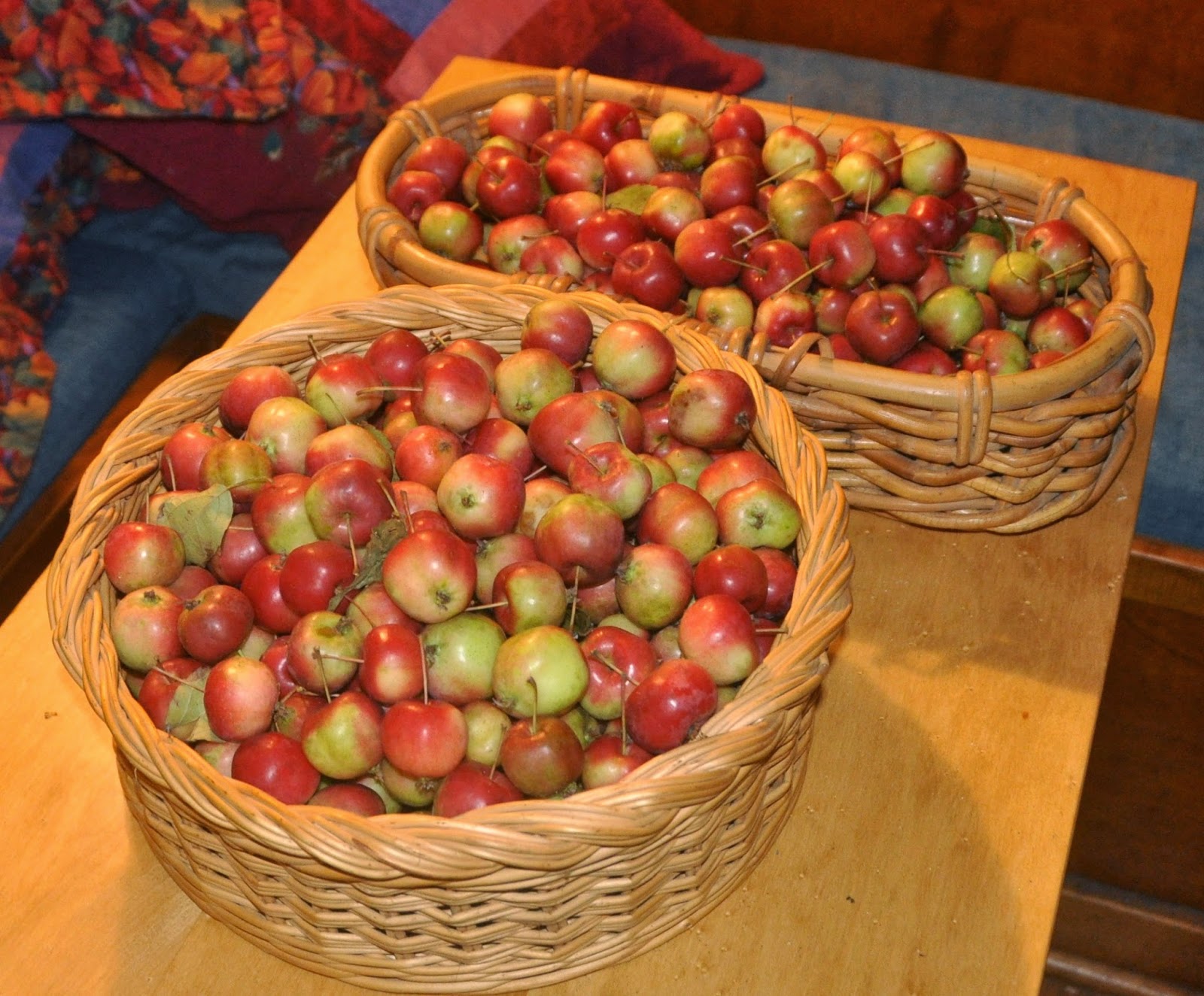 The time had come to make jelly -- something I've only done once or twice in my life and with less than inspiring results. But wild crabapple jelly -- it has such a romantic sound --  and I had to do something with all that fruit. 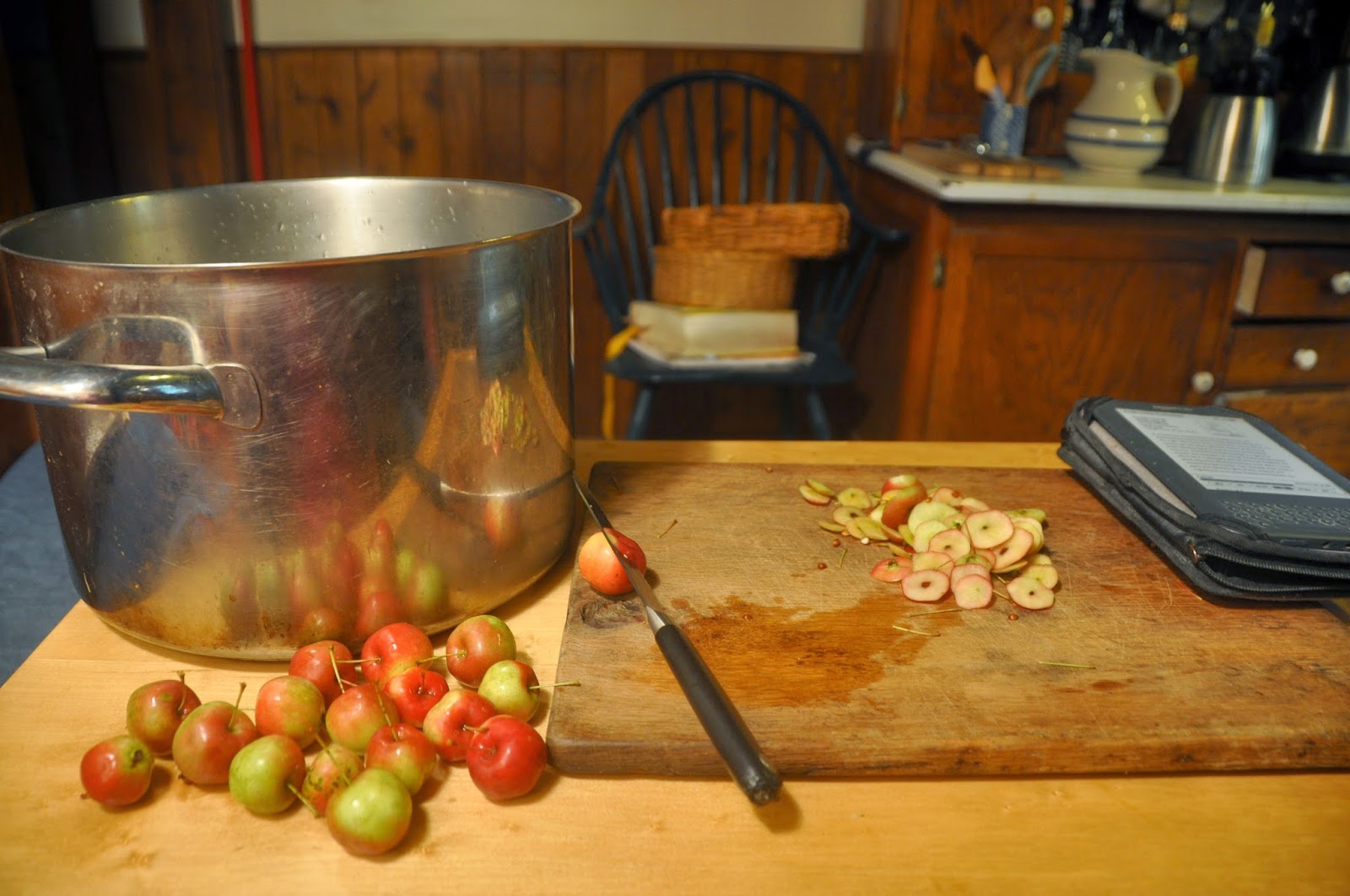 So while Neil Gaiman read his short stories to me through my Kindle, I removed stem and blossom ends and cut the tiny apples into quarters. It took a very long time. . . 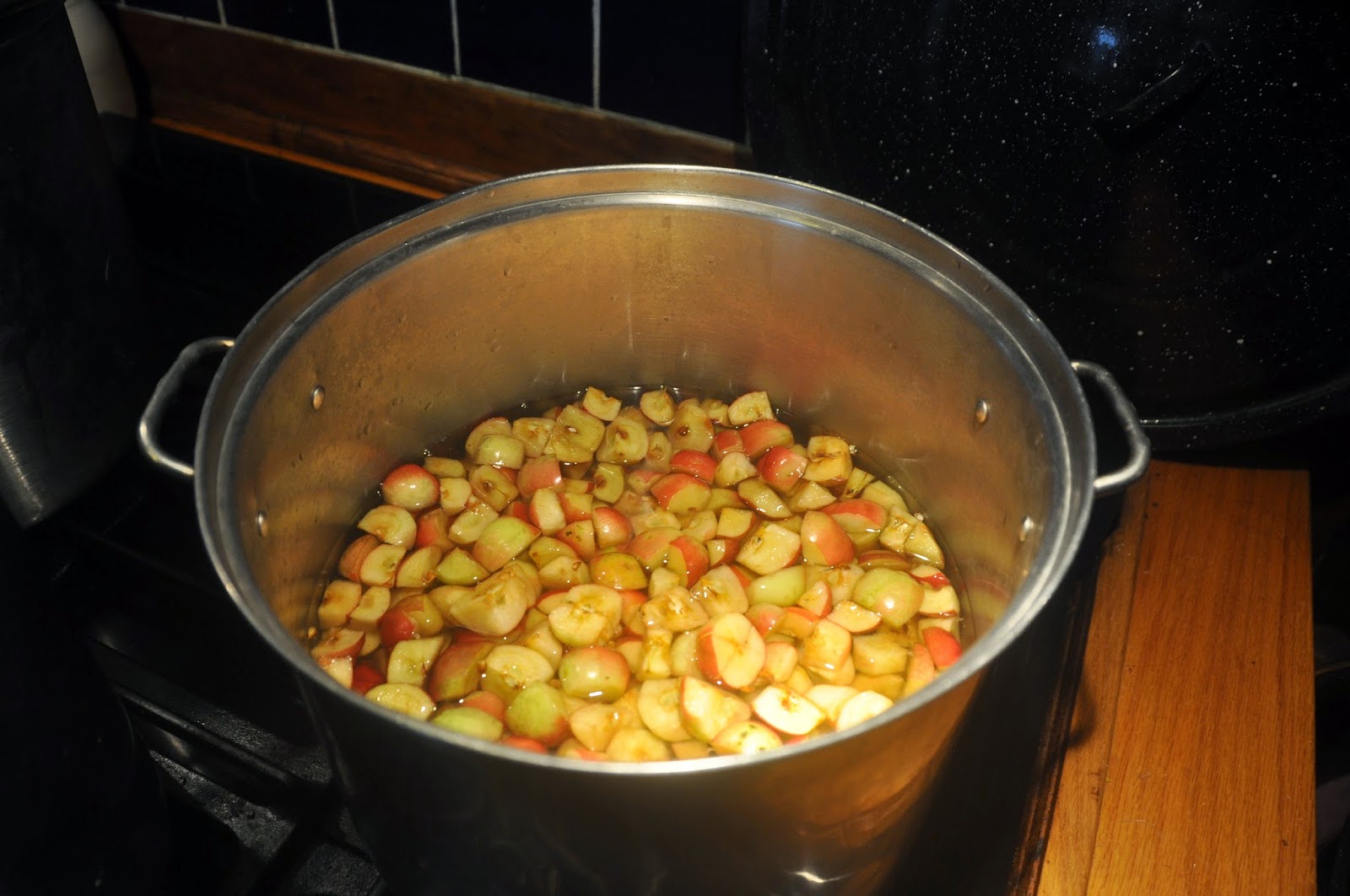 Heeding what the Ball canning book said about small batches, I put half the apple pieces into a pot with water to almost cover and boiled then simmered till the pieces were soft and had given up their juices. 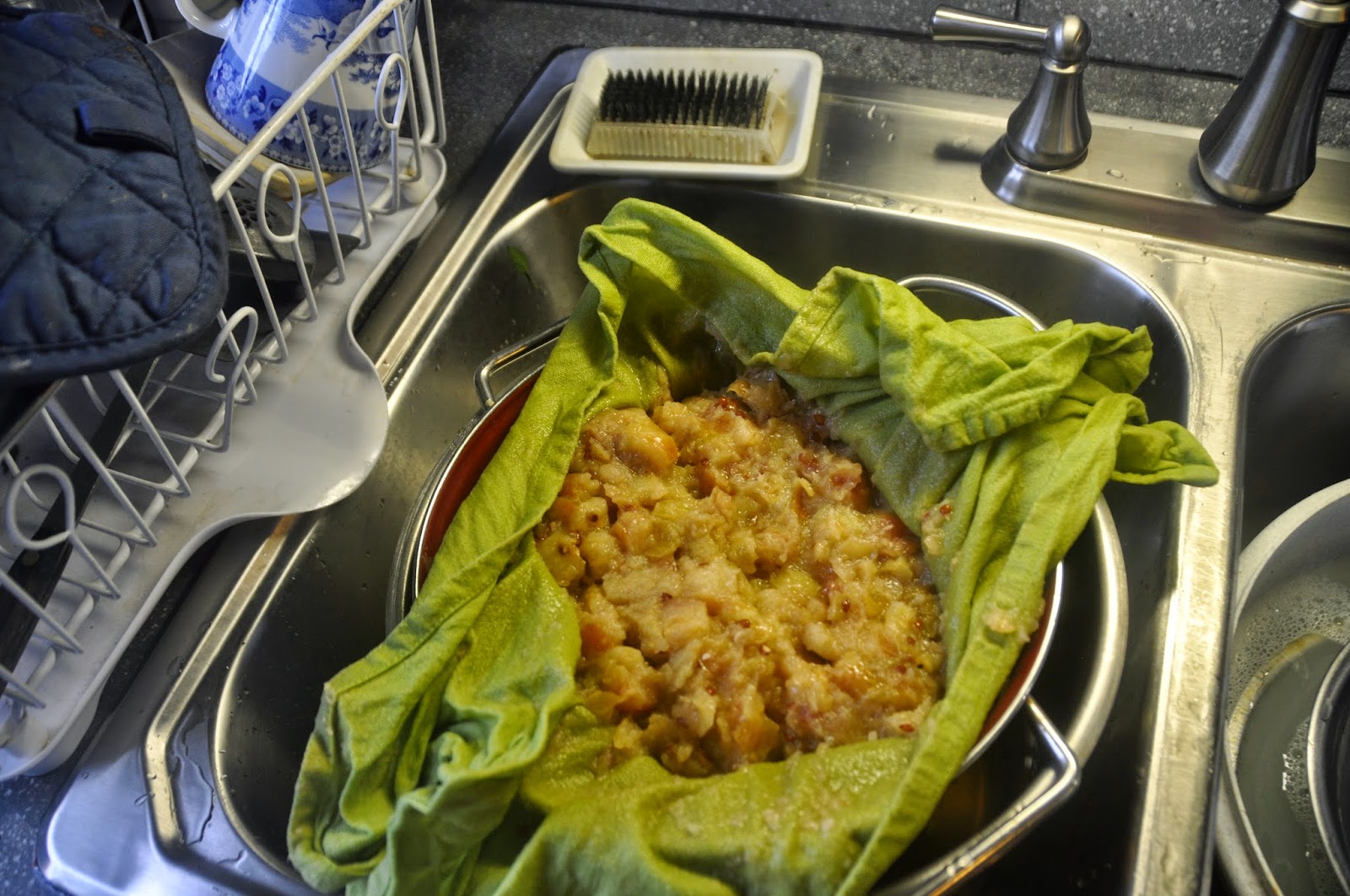 The pulp went into a dish towel- lined colander and some juice began to drip into the waiting bowl beneath but nothing near the four cups I'd been led to expect. 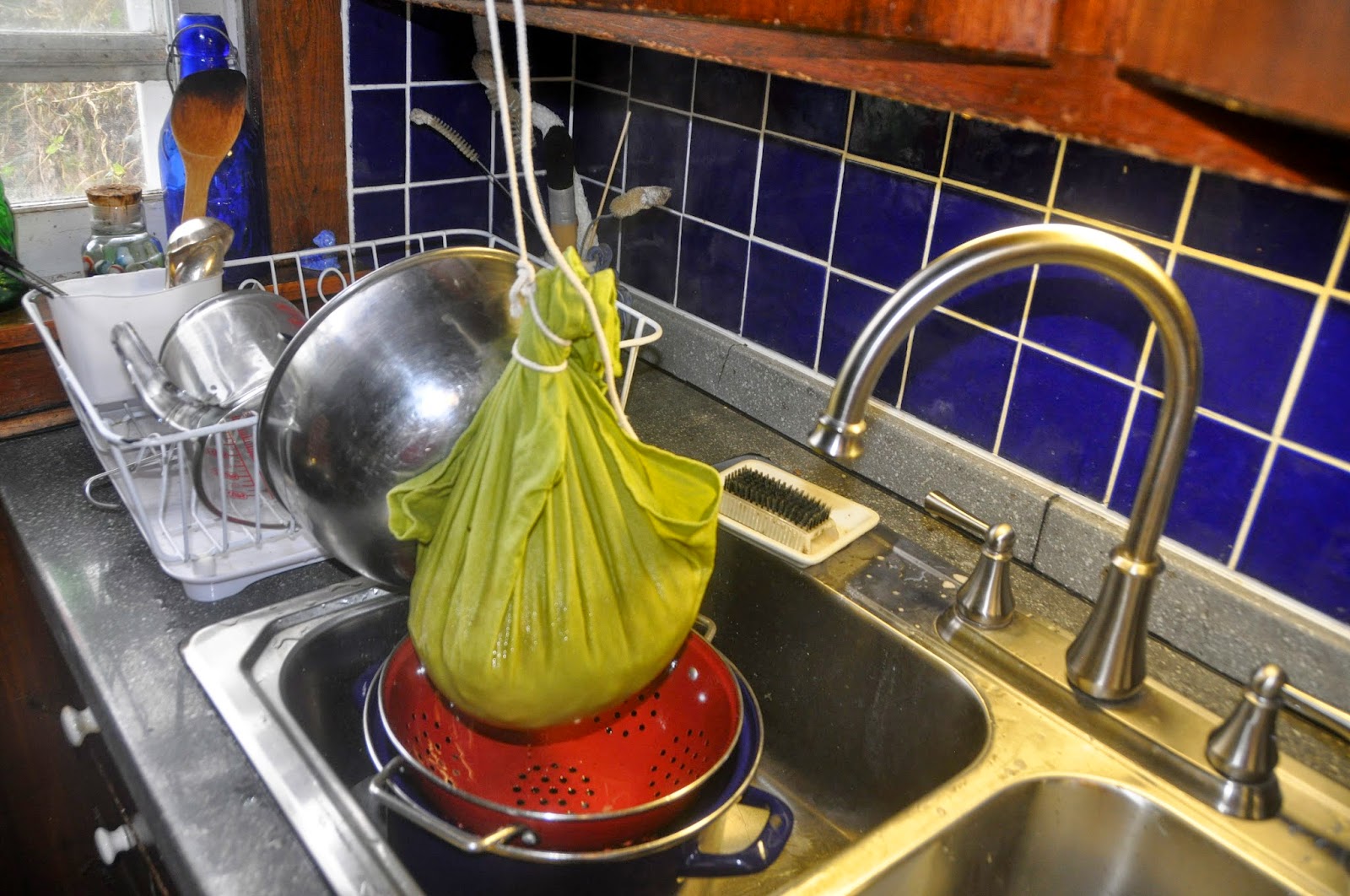 So I trussed it up to hang from a knob on the cupboard and more juice began to flow. I remembered the jelly bag hanging in my grandmother's kitchen in Tampa as every summer she made guava jelly to send to her sister in Alabama -- a partial return for the cane syrup and pecans and country sausage that made their way to Florida every year. 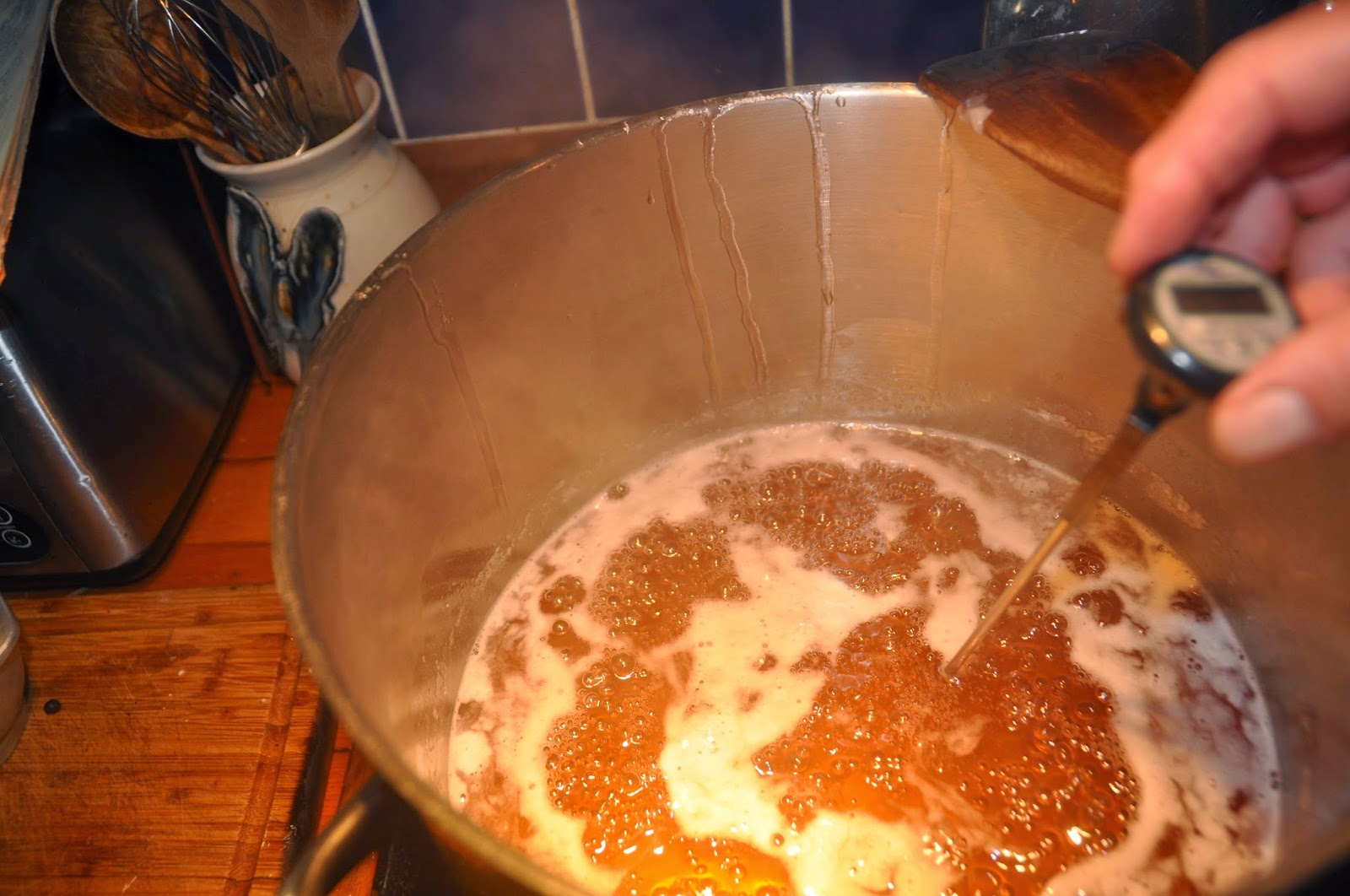 When at last I had four cups of juice, I added a great deal of sugar (I think it was 3 or 3 1/2 cups) and stirred and brought it to a boil. This is the exacting, almost alchemical, part of the process. In order to jell, the sugared juice has to reach 8 degrees Fahrenheit  above the temperature of boiling water. And since that differs with altitude, the jelly maker is advised to determine it for herself. (It's 205 here -- so I was aiming for 213 as my jelling point.) 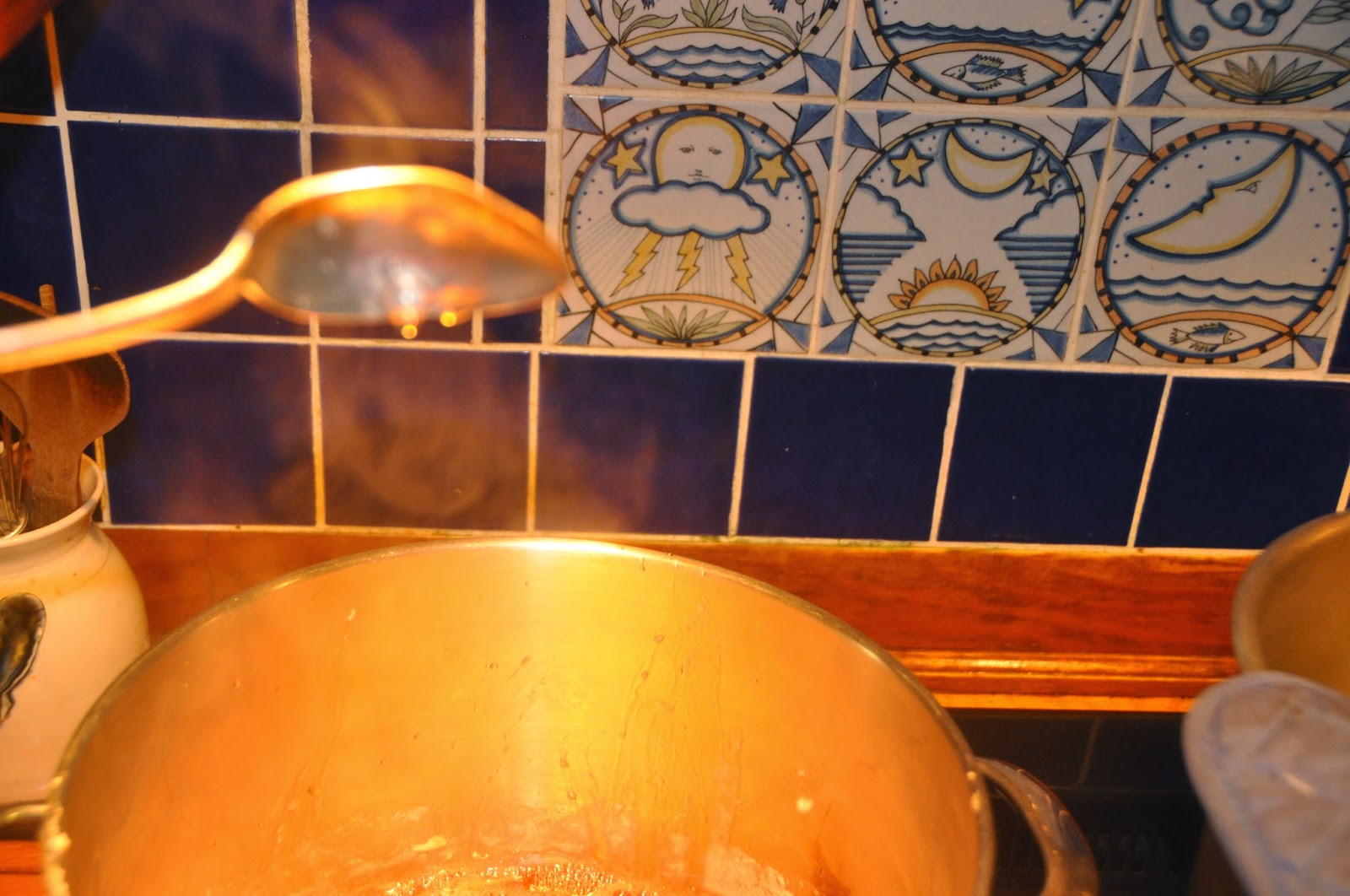 Or one can rely on the sheeting test -- dip a metal spoon in the hot liquid -- when the jelly begins to form two drips rather than one, you're close. Soon it will flake from the spoon in a sheet. and it's time to remove the jelly from the heat, skim off the white foam around the edges, and pour into sterilized, self-sealing jars  -- four of them with a bit left over for tasting and breakfast. ( very good -- very sweet -- a little goes a long way.) 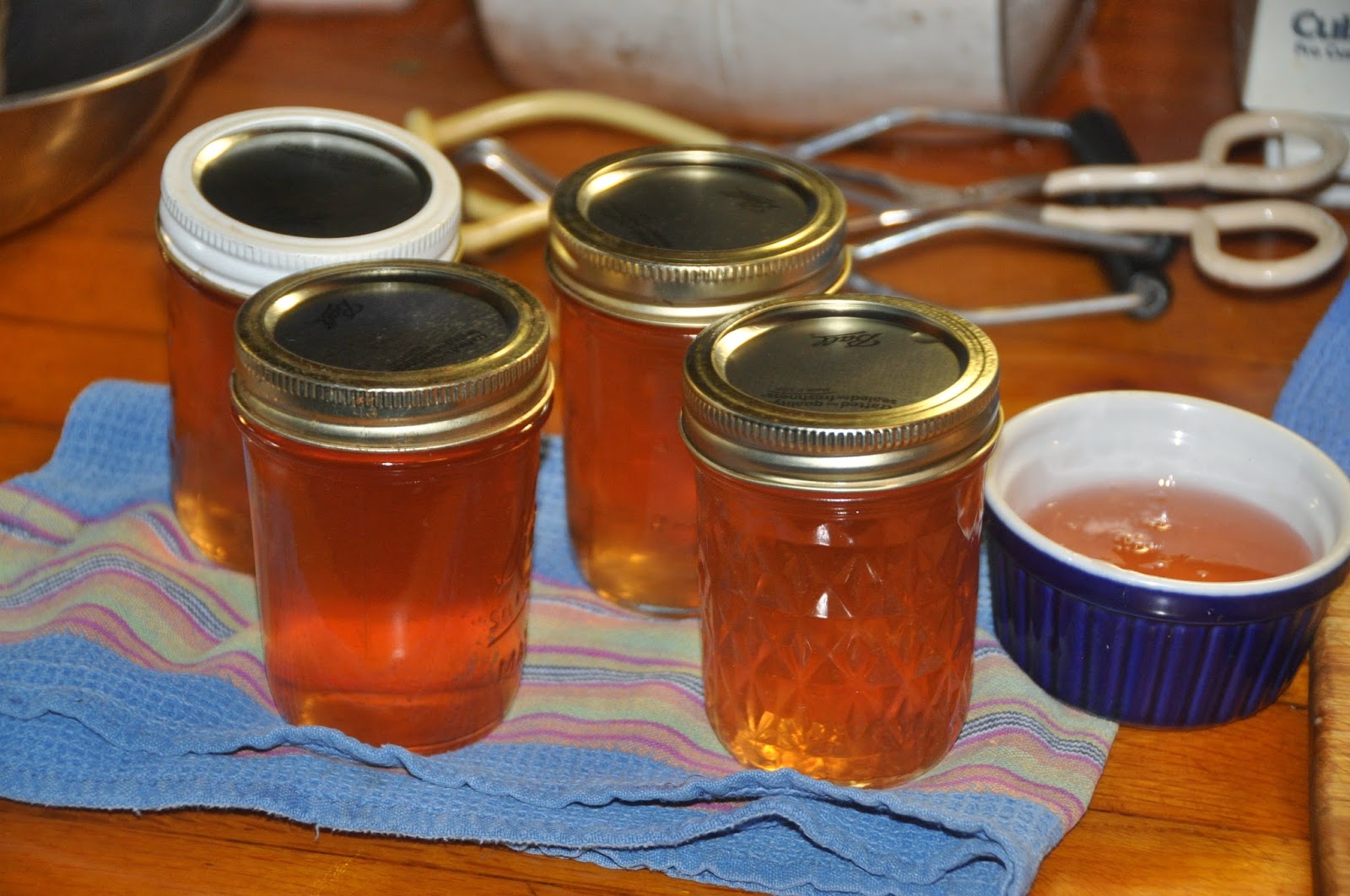 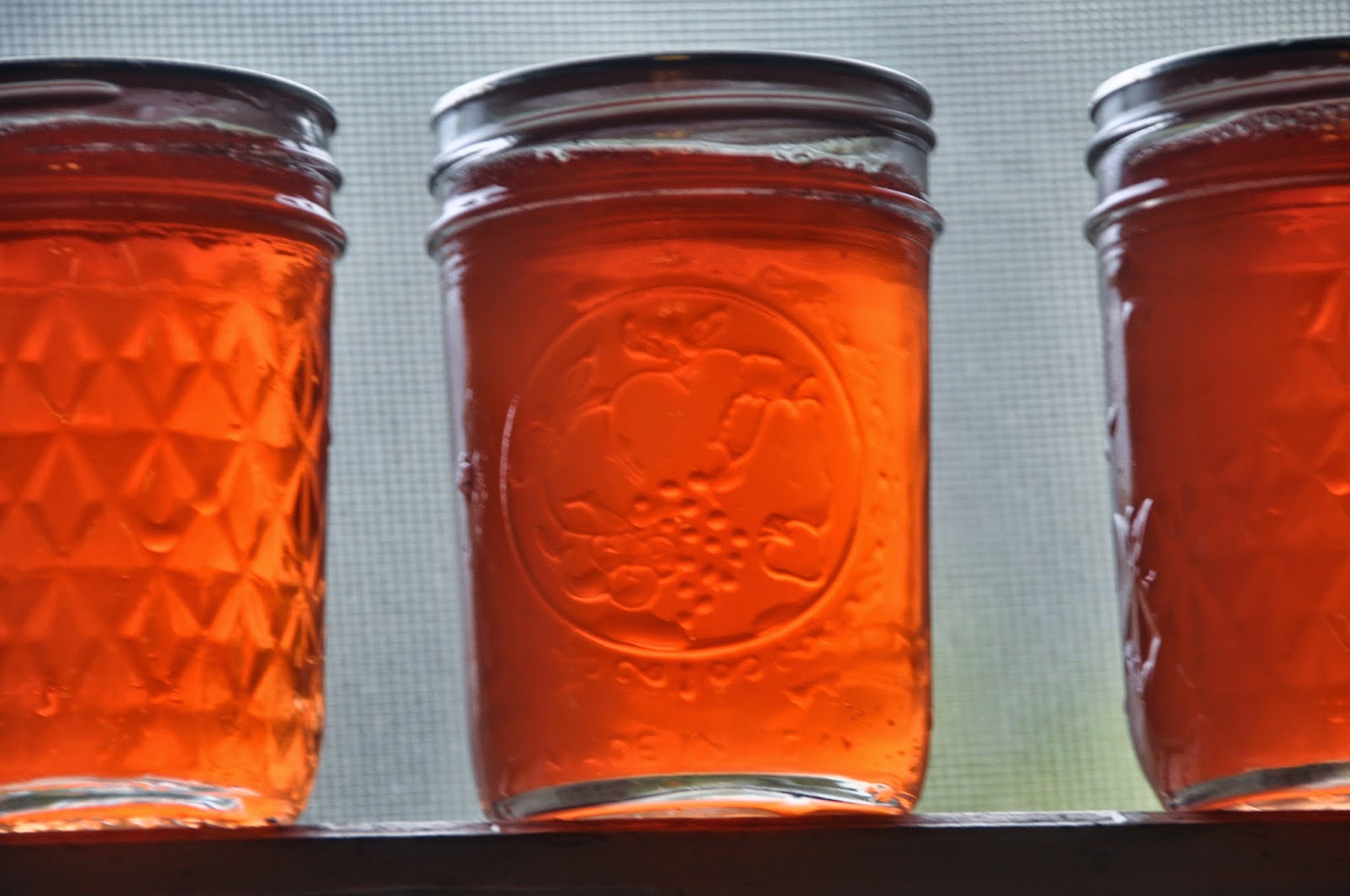 So it WAS crabapples! Bet that jelly is delicious!

Congratulations!
The process and result are here to admire.

Wow. The watching-the-temperature part would exhaust my nerves. I do know what you mean about being in touch with your roots, though. It's an adjustment in values, an addition of some perspective, isn't it?

Wonderful that you walked in your grandmother's footsteps, and know the sheeting trick as well as thermometer! Enjoy that jelly this winter! (I bought some locally made, which is as close as I choose to making it!)

I miss my grandmother's muscadine grape jelly with the parafin seals. I haven't had anything like it in years!

It looks wonderful Vicki and I'm sure it will taste wonderful too. The colour of the jars with the light shining through is magical. Well worth all the effort, I'm sure. Yes, we have to keep these traditions going.

You have inspired me to cook up my apples and make jelly. I hope I can do the follow through to get it done. Your jars of jelly are so beautiful and I know the jelly has to be tasting great.

Those jars of jelly are quite beautiful and I'm sure they taste wonderful too!

I am inspired. This has been the "jear" of the jalapeno and I have them fresh, pickled, and dehydrating. I must try pepper jelly next. Your crabapple jelly looks divine.

ah but what you paid in the day to make this will reap dividends on many a piece of toast...ha...we made some grape jelly from our arbor this year...

You'll be so happy to open one of those beautiful jars when there is snow on the ground (and I guess that does happen sometimes where you are?)
I remember my grandmother sweating over the stove to make just a few jars of jelly from the Concord grapes that grew over the stone wall in the lane. I'd love to have some of that grape jelly right now.

Vicki, your crabapple jelly jars are beautiful in the window's light. Very much more beautiful than what's in Tiffany's, believe me.

I wish that I had some family jam/preserves/jam making memories from my own family years way back yonder, but I don't. It's delightful, however, to catch that precious vibe from your post today.

Beautiful color and light. I will bring homemade peanut butter and we will have a partee.

Wow. I'm in total awe. Seriously. But then a lot of your cooking and baking sends me reeling with the realization of how much work my grandma did on the farm. When we visited as kids every summer, she rarely did any of the intensive work like canning; she wanted to be out taking walks in the woods with us kids. And yet, the shelves in the basement were always stocked full of vegetables, jams, etc. Amazing.

I adore preserves. Your jars are really glowing. My mother always made guava jelly and it looked so beautiful in the jars. I know exactly what you mean about feeling in touch with your roots, making this crab-apple jelly.