...or, The Plot Thickens 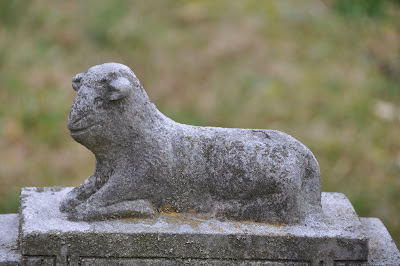 A few posts back, I spoke of finding what I thought might be the doll house grave Nancy had told me -- the grave of the Cantrell child who wandered off and froze to death up on Straddle Top Mountain.

Then I got an email from Phyllis who said: " My husband called Jeter Cantrell, and he said that he did have a little sister who wandered away from home at age three and froze to death. He thinks this would have been in 1925 or '26. And she is buried in Walnut.

However, he remembers there being a dollhouse and doll on the grave of a little McDevitt girl, who was buried "above the road on the bank." He thinks her name might have been Ruby, and that she had a twin sister named Reba. I'm not sure if he meant they both died young or not. He said their father's name was Regan." 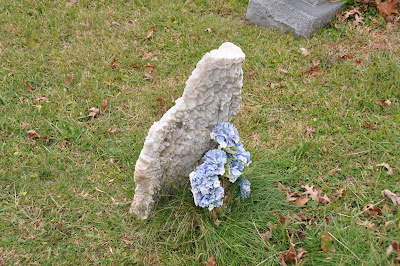 Aha!
So I passed this on to Nancy, who said: "Oh, my goodness! I know Reba McDevitt (if it's the same one) - she married Fred Rector (my cousin) and I was friends with their daughter. . . . I can still see that little doll house sitting up there on the bank. I vaguely remember looking in the windows of it and seeing dolls - one sitting in a little chair.


I don't remember hearing the story of twins and neither do my sister or brother but that doesn't mean much. " 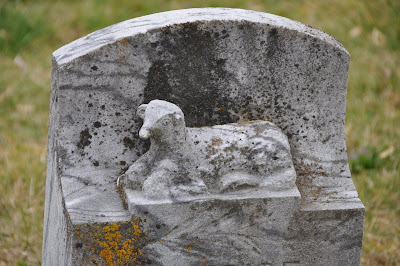 To straighten out this confusion, yesterday Nancy very kindly came out to Walnut to show me where she remembered the doll house being.

And she pointed out Straddle Top Mountain, where the little girl died -- not a great picture, what with all the power lines but that area from the peak on the right to the peak half-hidden behind the trees on the left is where Nancy's family would have seen the lanterns moving as searchers looked for the little girl. 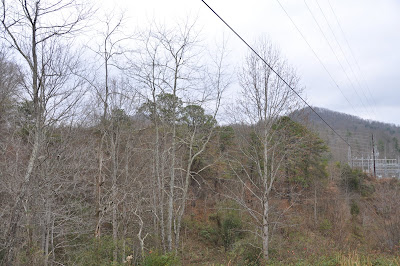 Nancy and I wandered through the grave yard and she pointed out markers of family and other folks she had known. I was paying special attention to the little lambs, wondering if one of these might mark the Cantrell child 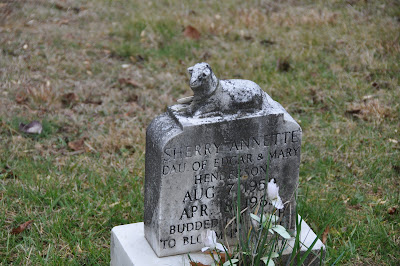 Of course, they all tell sad stories -- like this one: "Budded on earth to bloom in heaven."
But though we found a few Cantrells, I never found a stone that fit the time and the description of the child. 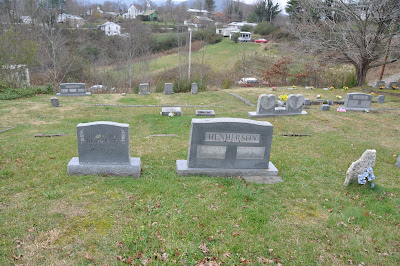 So we went across the road for Nancy to show me where the doll house grave had been. And there was Ruby McDevitt, who died at the age of seven.

Nancy said that someone used to put new dolls in the doll house now and then. So now, I'd like to know more about Ruby and the story behind the doll house. 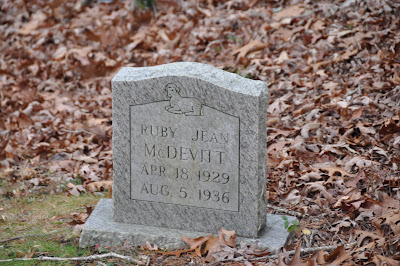 And I still wonder if that little broken-off stone back up in the far corner to the left of Ruby's grave, still might be that of the Cantrell child.

Nancy wants to know too and she's on the case. 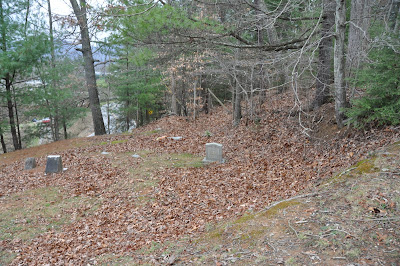 I'm hooked on this story. There's a novel brewing up, I just know it!

Very interesting, but sad story. I'm glad you found the grave and have help in trying to find out more information. Somehow this has got to be incorporated in one of your books!

Someone thinks to this poor little girl ,You remember her,and compulse us think to her...as if she were alive again ...So, we don't forget her although it's difficult to know the truth
Beautiful and moving photos .

This gets better and better! :)
We have a little snow left! :)

I think Miss Yves' comment is exactly right. I feel it's important to remember the dead, to speak their names (if we know them,)and to tell their stories.

Of course I want to use these stories. As I usually, do, it'll come out as a fictional mash-up of sorts. I might combine the stories of the two children in a novel -- giving the correct stories (as far as I know them)in the acknowledgments.

Glad to hear you and Nancy are on the case. I agree with Martin H - I see a novel brewing too. Can't wait to hear more.

Most children's graves have the pretty little lambs on them, at least where I grew up. I always went with my Grandmother after Sunday lunch to the cemetery to visit my grandfather, then on to her own family's plot. We were checking to see if they were mowed properly and often to place flowers there. This brings back a flood of memories of visiting the cemetery as a child - and where we'll both be buried someday.
Sam

P.S. Where I grew up, as I child I was told that you weren't supposed to walk on the grave. It was disrespectful to the dead. Is that true everywhere?

Sad but fascinating story; thanks for the investiagation and thr pictures. I love to browse in old cemtaries.

In Atlanta's Oakland Cemetary there is a little lamb statue beside a child's grave. In history walking tour you find out that the child had a duck that followed her whereever she went, but the monumeng maker couldn't carve the duck they wanted near her grave so they used the lamb instead.

If you're ever in Atlanta, they do the walking tours spring through fall with a variety of tours available--celebraty graves, African American history, Atlanta notables such the golfer Bobby Jones and Gone with the Wind author Margaret Mitchell, architectural tours, and one on Victoria symbolism.

If cemetqries facinate you too, you might also like the mysteries of Sarah Stewart Taylor which hinge on ghe customes and symbolism of mourning and cemeteries.

I grew up in Wisconsin and Ky. and the custome ther was ot to walk on graves too

Ruby AND Reba, twins? Now this is fodder for some fabulous fiction!!

I’m enjoying your search for the little girl’s grave. I enjoy going to cemeteries and I don’t find them macabre. I wrote a post on Oakland Cemetery in Atlanta – I don’t know if you read it (http://avagabonde.blogspot.com/2009/05/historic-oakland-cemetery.html) and while researching the subject I was surprised to find that visiting cemeteries was a great pastime in Victorian times and that the large Brooklyn Cemetery would get as many as ½ million visitors in the 1800s. I did visit my mother and father’s graves when I was in France in early November but also peeked at other tombs, old ones, and tried to imagine how their lives went.

I'm pretty sure I was taught not to walk on graves but I must have forgotten my manners in trying to read the markers for Nancy mentioned that custom. After which I did better.

My grandparents were great cemetery visitors -- and when my grandmother died (at 91,) once a week my grandfather would have himself driven out to Myrtle Hill where her grave was. Evey week he'd take a fresh pot of flowers and sit on the marble bench he'd had put by the grave.

Once when my boys (quite young at the time) and I accompanied him on the weekly pilgrimage, he poked at the grave with his cane and said, "There's where Ba live now."

Thanks Lynne and Vagabonde for the comments on Oakland. Usually, whenever I'm traveling, I visit old cemeteries if possible.

I kind of had a fit, trying not to offend my dear grandfather, and, at the same time, not wanting my boys to take away an image of their grandmother living in a box in the ground.

Lives! I meant lives! And how that paragraph got out of place I do not know.

Vicki, I'm fascinated and hooked and counting on you to keep us posted,please.

Just got off the phone with Jeter Cantrell -- brother of the lost child -- who has kindly filled in some blanks. I have a few more things to check and another visit to make to the cemetery and eventually there'll be another post on the subject. Stay tuned!

I see your mystery has now turned into 2. Can't wait to see what you discover about both little girls. Ruby died on my b-day.